Post-2020: Forays Into the Future of Art and Lens-Based Media

Post-2020: Forays into the future of art and lens-based media explores the current state of contemporary art in 2020 and offers aspirations for the field and application of lens-based media.

Image-making technology has become ubiquitous as the digital age has inspired new modes of connectivity, and photography and lens-based media have served as a crucial tool for change. The 21st Century paradigm shift of 2020 will forever be underscored by the COVID-19 global pandemic and framed within the sociopolitical tensions fueling civil unrest throughout the world. We are witnessing the negotiation of the new era and CENTER is collaborating with unique voices in the field to investigate the trajectory of lens-based media practices and speculate on the future within this pivotal context.

Thank you to those that joined us online for the Panel Discussion moderated by Will Wilson, Program Head of Photography at the Santa Fe Community College, and Photographer. Exploring alternatives to the current state of the art world and discussing new ways of producing, sharing, and supporting art with the following panelists: Candice Hopkins, Senior Curator of the Toronto Biennial of Art, Whitney Johnson, Vice President of Visuals and Immersive Experiences at National Geographic, and Gregory Sholette, Associate of the Arts, Design & the Public Domain program of Harvard University’s Graduate School of Design.

Candice Hopkins leads the curatorial direction of the Biennial including new art commissions, exhibitions, and publications. Most recently co-curator for SITE Santa Fe’s 2018 Sitelines Biennial and the Canadian Pavilion for the 2019 Venice Biennial, Hopkins has developed major international exhibitions, including Sakahàn: International Indigenous Art (2013), National Gallery of Canada, Close Encounters: The Next 500 Years (2011), Plug In ICA , and, dOCUMENTA 14 in Kassel and Athens (2017). She has been published widely and lectured internationally and is the recipient of the 2015 Hnatyshyn Foundation Award for Curatorial Excellence in Contemporary Art. Originally from Whitehorse, Yukon, Hopkins is a citizen of Carcross/Tagish First Nation.

Whitney Johnson leads the team responsible for photography, emerging formats, video, and podcast operations. Prior to joining National Geographic magazine, she was the director of photography at The New Yorker where her work was widely recognized, earning awards from the American Society of Magazine Editors; Awards of Excellence from the Society of Publication Designers; and a Peabody, in collaboration with Human Rights Watch and the photographer Platon. Whitney also enjoys teaching and mentoring in photography.

Artist, writer, activist, and teacher Gregory Sholette specializes in the history and theory of contemporary socially engaged art. His research and artistic practices focus on issues of equitable labor justice for artists, the activist agency of “dark matter” art, critical pedagogy, and organizing counter-institutional resistance to authoritarianism, neoliberalism, and oppressive, racialized historical narratives. A co-founder of several artists’ collectives including Political Art Documentation/Distribution (1980), REPOhistory (1989), and Gulf Labor Coalition (2010), as well as the curator of Imaginary Archive, a collection of documents about a past whose future never arrived, his publications, include a special double issue of FIELD Journal of Socially Engaged Art with over thirty global reports focusing on “Art, Anti-Globalism, and the Neo-Authoritarian Turn,” and the books Art as Social Action (with Chloë Bass, 2018, Skyhorse Press); Delirium & Resistance: Art Activism & the Crisis of Capitalism; Dark Matter: Art and Politics in the Age of Enterprise Culture. (Pluto Press 2017 & 2010); Collectivism After Modernism (U. Minn., 2006); The Interventionists with Nato Thompson (MIT 2004). Sholette is a graduate of the Whitney Program in Critical Theory (1996), did his MFA at UC San Diego (1995), BFA at The Cooper Union (1979), and received his Ph.D. in Heritage and Memory Studies from the University of Amsterdam, The Netherlands (2017). He is associate faculty at the Art, Design, and the Public Domain program of Harvard University’s Graduate School of Design, and in the past decade he has co-directed the pedagogical art and social justice initiative Social Practice Queens where he is a professor of art. Sholette blogs at Welcome To Our Bare Art World: gregsholette.tumblr.com 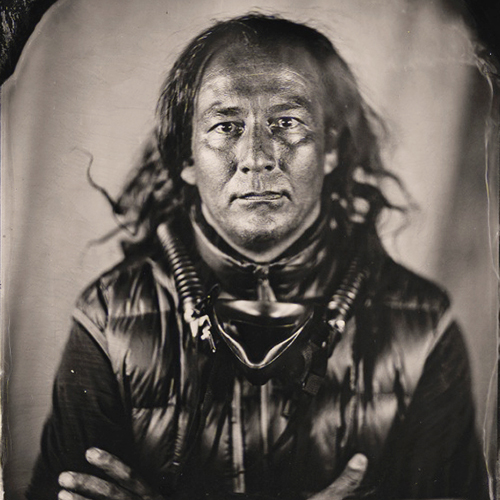 William (Will) Wilson is a Diné photographer who spent his formative years living in the Navajo Nation. Born in San Francisco in 1969, Wilson studied photography at the University of New Mexico (Dissertation Tracked MFA in Photography, 2002) and Oberlin College (BA, Studio Art and Art History, 1993). In 2007, Wilson won the Native American Fine Art Fellowship from the Eiteljorg Museum, and in 2010 was awarded a prestigious grant from the Joan Mitchell Foundation. Wilson has held visiting professorships at the Institute of American Indian Arts (1999-2000), Oberlin College (2000-01), and the University of Arizona (2006-08).